Review: Bloodshot Feels Like It’s Embarrassed To Be a Superhero Movie

If any Valiant comics fans out there had hopes for a Bloodshot post-credits tease of the Hard CORPS, Ninjak, Faith, or anything else, check those expectations now. Although it was supposed to kickstart a Valiant cinematic universe, the Bloodshot movie doesn’t even display the company’s logo upfront. Nor, for that matter, is its lead character ever addressed onscreen as “Bloodshot.” Additionally, his distinctive gray-white skin appears in exactly one scene.

Sony undoubtedly understands that Fast and Furious‘ Vin Diesel is a bigger draw than a comic book character that didn’t come from Marvel or DC. Yet the bargain bins are also littered with failed Diesel franchises, from Babylon AD to The Last Witch Hunter. So what we have here feels like a pre-X-Men ’90s superhero movie; one that sells itself as sci-fi action, and trusts comics fans to get the more subtle references.

Bloodshot begins like many generic action movies, with the military battling terrorists overseas. What feels like a bad Michael Bay parody, however, gradually becomes something more. Like the source comics, Bloodshot may look like standard heroics, but features better writing than many others. What seem at first to be lame cliches are there for a reason, in a plot more self-aware than one first thinks. Comic readers may get way ahead of the story once they realize it’s loosely based on volume 2 and uses the Ray Garrison iteration. Diesel’s Garrison wakes up in a high tech lab after being shot in the head. Naturally, he quickly learns that he has nanites in his bloodstream. He’s basically the Six Million Dollar Man, although the nanites rebuild him in real time whenever he sustains damage. 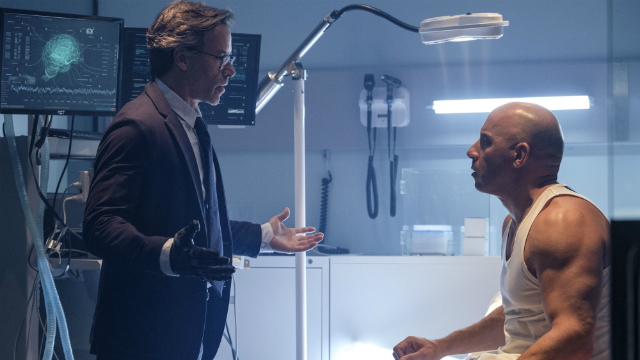 Regardless of Garrison’s memory loss, the face of the man who murdered him and his wife remains in his dreams and visions. And thanks to the nanites developing new talents at every turn, he’s able to evade capture, or so it seems. Any time a hero like this feels too overly powered, one can bet there’s a larger threat they might not see right away.

Needless to say, Diesel gets to drive fast cars and punch things real hard. Essentially, it’s everything he normally does in Fast and the Furious. Of the new crew, the gorgeous Eiza Gonzales makes the biggest impression as a swim ninja with robotic lungs. And because it’s in the trailer, it’s no spoiler to say robot-legged Sam Heughan eventually adds Doc Ock-style bonus arms to fight. 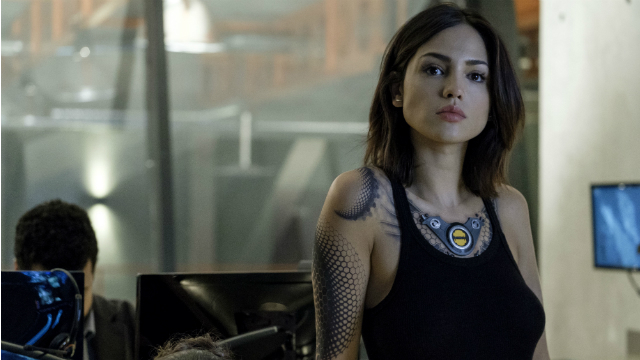 On a relatively low estimated budget of $45 million, this Bloodshot movie often gets showy with special effects. It’s always cool to see Diesel’s face get ripped apart and repaired, for instance. Though in one scene set in virtual reality spends long, unnecessary seconds watching the entire scene get rendered. It feels like a pointless attempt to impress. The film’s fight scenes are edited awkwardly and frequently feature obvious greenscreen backdrops. A climactic fight atop plummeting elevators really ought to feel more urgent than it actually does. Without that sense of urgency, it just doesn’t play as well.

Jeff Wadlow and Eric Heiserer’s screenplay tries to write creatively around the fights, so that at least the stakes are clear. But first-time feature director Dave Wilson comes from the world of video game trailers, and it shows. Too often it all feels like frantic button-mashing, rather than an engrossing bit of physical storytelling. Compare this movie’s bike chase to the one in Gemini Man, and it’s instantly clear what a difference a veteran director can make. Wadlow and Heiserer wisely kept the story contained and inexpensive. Even so, it still raises a question: why does nobody in this world seems to notice Garrison wreaking havoc? 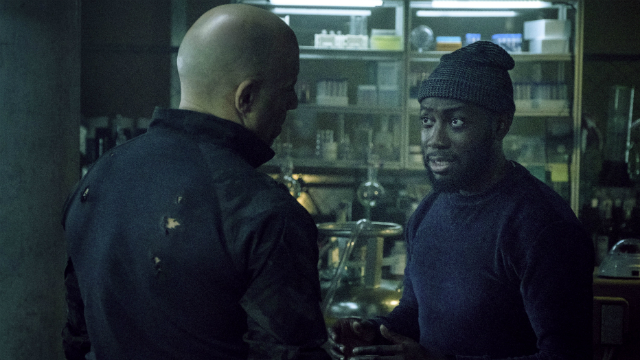 It would have been exciting if the movie wrapped up with Diesel sporting a more comic-book inspired look as he entered a larger world of “powereds.” As it stands, it looks like the only plan is for more shots of Diesel and Gonzales in tight shirts at sunset.

Even at the worst of times, Diesel doing his thing is fun. But because we’ve all seen him be Groot, we know he can do more. Rather than bringing the actual Bloodshot comic to the screen, this film simply stretches it to fit Diesel’s existing skills. Perhaps Diesel would have risen to the larger challenge if given the chance. Diesel may look faster and furiouser than ever, but he’s not especially Valiant.

The living vampire gets a lifeless adaptation.
Movies 11 months ago

Vin Diesel Offers an Update on the Next Riddick Sequel

According to Vin Diesel, another Riddick sequel is still in the cards, as is another video game adventure starring the…
Movies 2 years ago