Ant-Man and The Wasp Blu-Ray Review

As I mentioned in my original review for the film, Ant-Man and The Wasp was one of my most anticipated movies of the summer. When people think of all the heroes that the MCU has introduced in the last 10 years, Ant-Man often gets lost in the shuffle. Ant-Man is one of the most outrageous characters in terms of his powers, but regardless, his 2015 origin story managed to somehow make the eponymous character relatable and sympathetic. Part of this is Paul Rudd’s charm as a leading man, but it’s also due to the fact that Scott Lang is a good guy who is just trying to do his best. In the sequel, Lang is a man who gets unwillingly thrown into this adventure. This not only makes Lang even more appealing as an audience surrogate, but it also continues that fish out of water feeling form the original.

More so than it’s predecessor, director Peyton Reed’s Ant-Man and The Wasp presents a singular vision of the character. As much as there is to like about the first film, trying to connect two different visions ultimately hampered it from being truly great. While the original film did a good enough job of establishing Ant-Man in a convincing way, the sequel doubles down on all of the weird eccentricities that encapsulate the eponymous characters. Part of the reason why this works so well is because of the dynamic between Paul Rudd and Evangeline Lilly, which smartly becomes the focus of the sequel. Also expanded upon is the relationship between Lilly’s Hope and Michael Douglas’ Hank Pym. Indeed, the dynamic between the two working together toward a common goal naturally makes their journey in the film a more personal one this time around.

RELATED: Evangeline Lilly Looks Back At Ant-Man and the Wasp’s Post Credits Scene

Part of what makes Ant-Man and The Wasp so successful is its insistence on being a standalone story. Reed has a hell of a time playing in the Ant-Man sandbox, offering more inventive ways of presenting the miniature/maxiture action throughout the film. At the same time, the second half of Ant-Man and The Wasp becomes a bit more esoteric once they get into the Quantum Realm. This is honestly where the film suffers a bit—along with breaking the logic of the pseudo science that was established in the first film. While it certainly has stakes, there’s a certain feeling after re-watching the movie that it still feels almost inconsequential in the grand scheme of things. The Quantum Realm stuff is certainly important to the MCU moving forward, but the overall film sort of feels like filler. Very entertaining filler, but filler nonetheless.

While Ant-Man and The Wasp had the unfortunate reality of following both Avengers: Infinity War and Black Panther, it’s clear that the film was intended to be a palate-cleanser after the dark events of it’s predecessor. Even if the film wasn’t your cup of tea, you have to commend Ant-Man and The Wasp for being it’s own thing and attempting to do something different. Despite a few small issues, the film is certainly more self assured than it’s predecessor and it has a very unique vision attached to it. Even after watching it a few times, it’s still readily apparent that this movie is exactly what it needs to be: light and fluffy summer entertainment.

Ant Man and the Wasp is presented on home video with a MPEG-4 AVC transfer that preserves the native 2.39:1 aspect ratio of the film. Not only does this transfer of the film feature a great deal of saturation, but it also has a healthy dose of contrast (almost noir-looking at times) in the image for such a light-hearted tone. Shot on a variety of digital cameras that range from 4K to 8K resolutions, the film was finished with a 2K DI that remains crisp and clean as could be on the blu-ray. There’s no digital artifacting to be found, and the compression rate remains between a solid 30-35mbps throughout the film’s 118-minute runtime. Skin tones remain consistent, but if there’s one complaint it’s that the day exterior sequences feel a bit flat. Overall, Dante Spinotti’s work on the theatrical release is well captured and preserved on this blu-ray transfer. 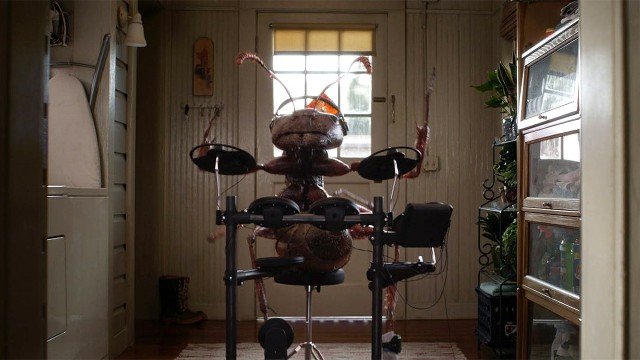 Presented in robust DTS-HD Master Audio 7.1 track, audio for Ant-Man and The Wasp is easily the best technical aspect of this blu-ray. The audio mix features emphasis on the dialogue juxtaposed with Christophe Beck’s wonderfully playful score. Part of the reason the film succeeds in having a more playful tone is Beck’s choice to incorporate a variety of weird little musical touches. Using a more traditional symphonic score juxtaposed with electronic flourishes throughout, this audio track highlights the bombastic score and the wonderful sound effects. Overall, this audio track is up to par with the audio quality we have come to expect from these recent MCU blu-ray releases in preserving the theatrical experience in terms of sound quality. 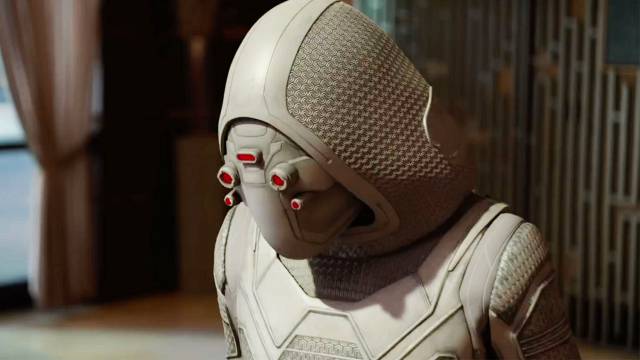 Making-of Featurettes: Fairly light and entertaining, there’s not much to digest here other than talking head interviews inter-spliced with quick BTS shots.

Gag Reel and Outtakes (3:47; 1080p)—A pretty traditional series of outtakes, mishaps and other antics on set. The Stan Lee outtakes are clearly the highlight here.

Deleted Scenes (1:38; 1080p): There are two short deleted scenes included on the disc. The first is a small scene with Janet and Hank in the Quantum Realm. The second scene features Sonny Birch learning a crucial piece of information that clarifies his motivation in the third act. Although Peyton Reed does a commentary for these scenes, he never really clarifies why they were cut as both scenes were entertaining and informative.

Audio Commentary: Peyton Reed rides this commentary track solo, providing an informative look at many of the choices that were made in the sequel. From the character motivations, design and making of the film, to his inspirations for the sequel, Reed covers everything but the kitchen sink in this excellent commentary track. 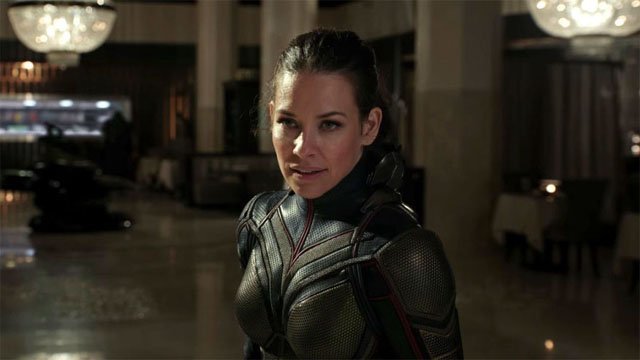 For the most part, this blu-ray release of Ant-Man and The Wasp is pretty much in line with what we’ve come to expect form MCU home video releases in the past. With the exception of Peyton Reed’s commentary for the film, the special features included on this disc are middling at best. While some of the early MCU releases carried great special features, Disney has really dropped the ball in the past few years with behind the scenes features on their home video releases. Overall, this Blu-Ray of Ant-Man and The Wasp is certainly a must-buy for both casual and hardcore fans of the MCU due to its breezy plot, fun tone, and excellent technical specs. Recommended.

It's going to be really cool.
TV 1 hour ago

The new frontier will be revealed.
Movies 1 day ago

Jonathan Majors seems off to a good start as Kang.
Movies 1 day ago
Loading Comments...