Let’s start with the Joker, because McFarlane makes a lot of versions. But while most of those in the DC line share base body parts, the MK Joker looks mostly new, and is probably the best version overall. Inspired by Heath Ledger’s version without actually looking like Ledger, he sports the dark eyeshadow and scarred smile. And this particular variant comes covered in blood, though a clean version can also be had. 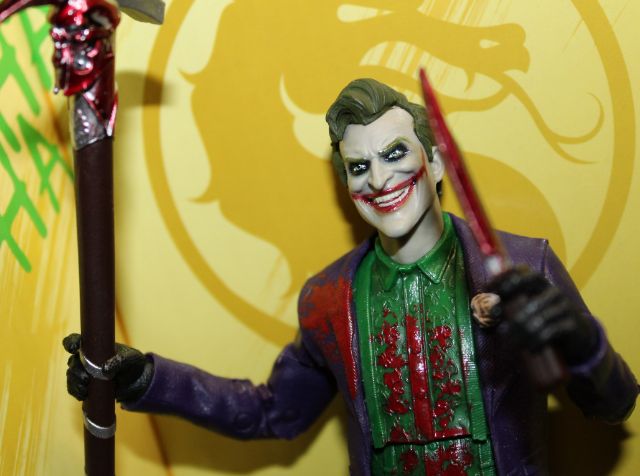 The blood really brings out the embroidery design in his shirt, while the suit and gloves feature texturing to simulate clothing materials. The pants feature sculpted pinstripes, where most McFarlane Jokers have them drawn. In package, he features a unique, Joker-vandalized Mortal Kombat insert. And both he and Kotal Kahn get held in place by a body-conforming plastic tray — no ties required. More of that, please! [She-Spawn: “Hell no! Plastic shirt ties 4 life!”] 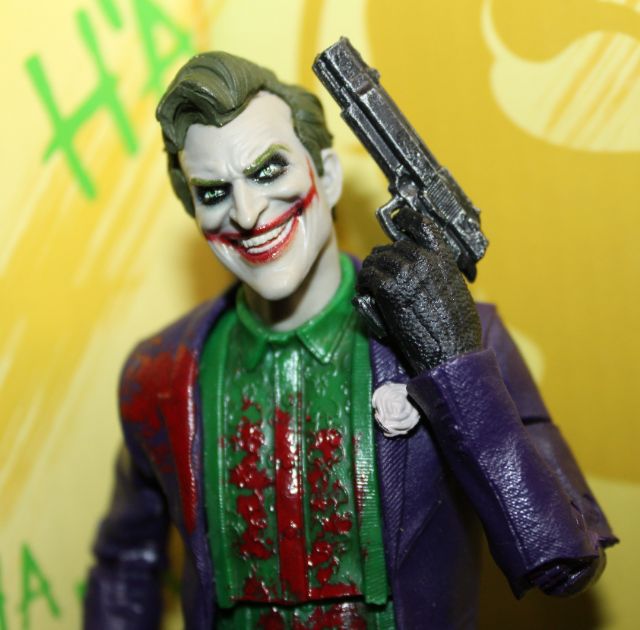 Because of Warner Bros. rules, Joker can’t come with guns. However, his hands do have trigger fingers, and Soul Crusher’s handgun fits perfectly. Almost like that was the intent. But hey, blood soaked pickaxe and knife are so much more kid-friendly. Both with surprisingly thick handles, but they look effective in his hands, especially as melee weapons for fighting game scenarios. 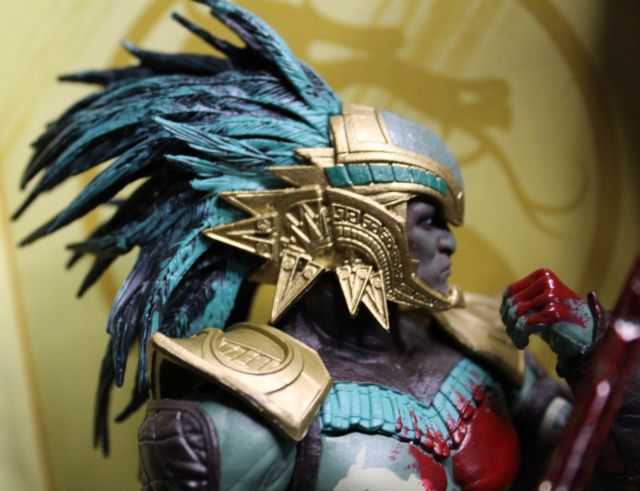 Kotal Kahn, an interdimensional Aztec (“Osh-Tekk”) once worshipped on Earth by the Mayans as a war god, remains one of the coolest new Mortal Kombat designs. His legs look a bit short at first, but that’s mainly due to the huge headdress. Nicely for McFarlane, he wears a very Spawn-like logo on his chest. The combination of gold armor pieces, sandals-and-loincloth garb, body paint, and an aquamarine complexion just works well together, with an extra wash on h is face for detail. Plus the blood splatter, which makes for an optional variant, but effectively makes the loincloth look stained, and really brings out the raised details on his big, blocky sword. In a movie, the blood revealing all that script would cause something magic to happen, no doubt. 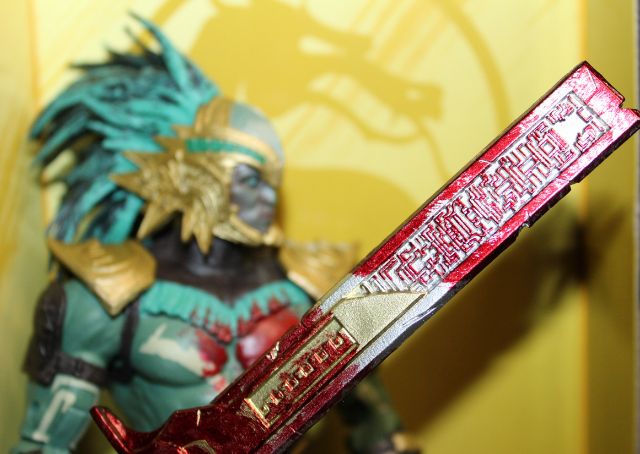 With that muscular frame and tight joints, particularly in his torso and waist, Kotal may not be the most poseable, but he looks great in the neutral stance. Seems just like the kind of guy a rain forest tribe would make a statue of.

Moving on to the Spawn side of the aisle, She-Spawn comes in an absurdly massive package with more weapons than she can handle. It seems like a gimmick to up the price, but there may be another logic to it… 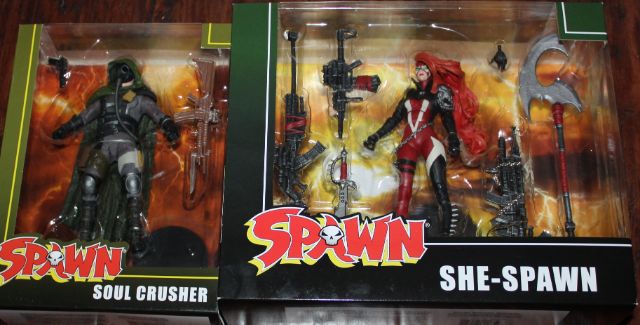 As mentioned with the Joker, Warner Bros no longer allows guns to be packed in with DC action figures. It’s gotten so a character like Red Hood, known for packing heat in the comics, includes hands making finger-gun gestures. Well, it just so happens that the smallest of She-Spawn’s guns fits quite well in the most recent Red Hood’s right hand. You may have to pry the trigger finger a bit, which will leave stress marks, but they look like powder burns, and it works. 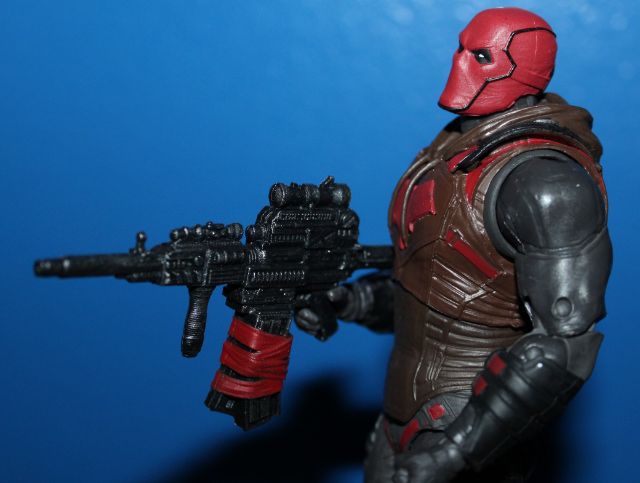 McFarlane Toys can’t advertise that Spawn characters’ guns work for DC. But mostly, they do, although many of the Spawn figures come in a slightly larger size. She-Spawn works if one imagines her as a large Amazon. Prior of this character, who began as a toy design, came fully masked. The latest take seems inspire by McFarlane’s loss of Angela to Marvel. That orange hair and pretty face Todd loved to draw now adorn this hellion. Her hair tendrils can even grip the knife she comes with. 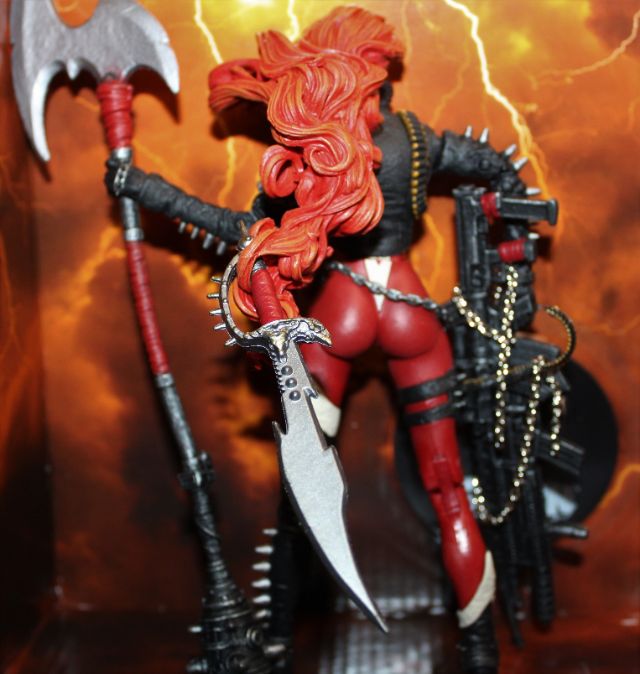 The top heavy hair and the high heels with articulated toes make her a little tougher to balance without the figure stand. For that, the pseudo Star Trek/Vulcan wedding weapon, bottom-weighted, serves as a big aid. She also has several big guns, including one designed to look like several stuck together, wrapped in a chain. The chain unwraps easily and can be applied anywhere. 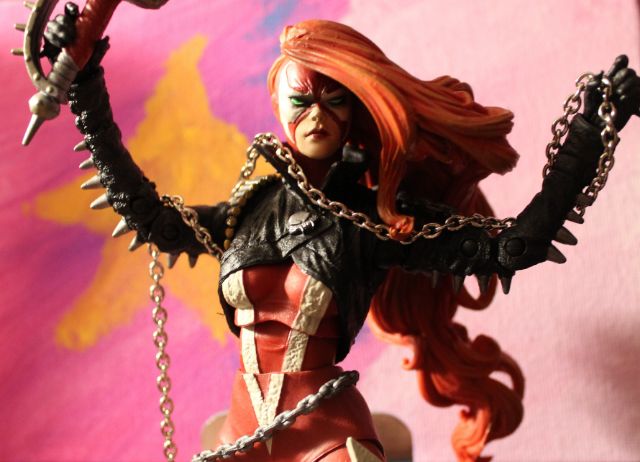 Yeah, after complaining he wouldn’t put an ab joint in Kickstarter Spawn to break up the sculpt, Todd gave her two. Maybe he’s listening.

Soul Crusher is the smallest of the new Spawn figures thus far, the same size as DC and MK. So $24.99 may seem unfair. But he does include two guns that your DC figures can hold: the handgun (which holsters on his leg), and a rust-colored rifle. 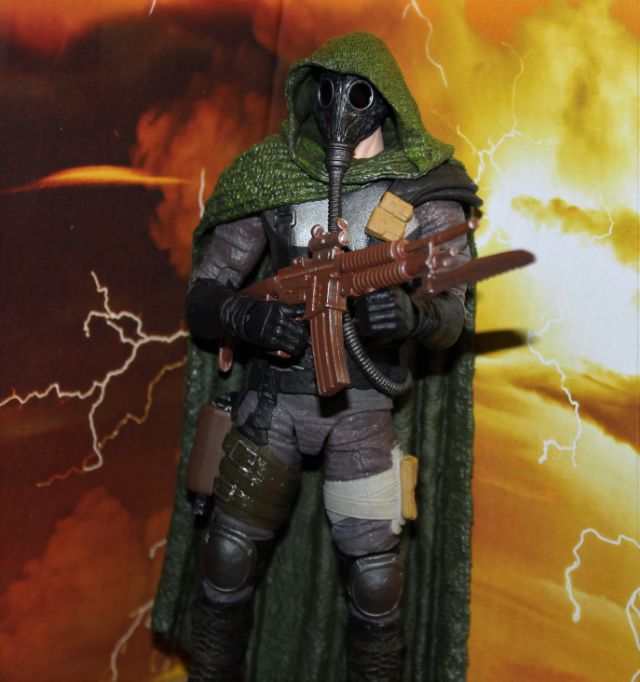 Aside from his cloak having a separate hood for more posing, and the fancy fabric texture and paint style on it, this figure mostly looks like the sort of design a movie studio might have used for a “realistic” Doctor Doom in the ’90s. Back when actual comic book costumes still embarrassed them. 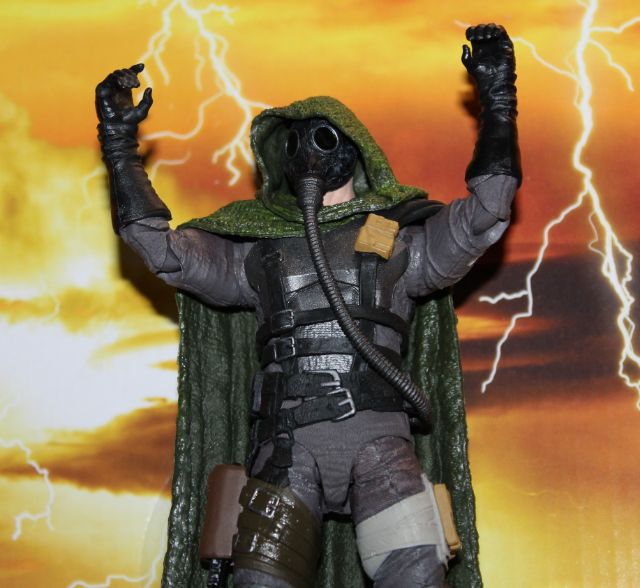 Just imagine that guy above yelling “Richards!” through a voice distorter. It still beats Julian McMahon’s version. Other than that, he’s a new enough addition and generic enough design that he’ll appeal mostly to fans. And perhaps customizers who want a hypothetical ’90s Jim Henson-style Doctor Doom to fight Ninja Turtles, or something.

Of these four figures, Joker is surprisingly the winner. As someone who has reviewed a lot of McFarlane Jokers, I recommend this one the most. Especially with the blood. She-Spawn, while overpriced at $39.99, double Joker’s cost, makes a nice figure, and that arsenal may prove a huge help for larger McFarlane collections. Kotal Kahn looks great even to collectors with no attachment to the character, leaving Soul Crusher arguably the one left out here. Depending how badly one wants his guns.

Entertainment Earth has preorders for all except Kotal, who’s in stock as of this writing. (Purchases made through Superhero Hype links may earn fees for this site, under an affiliate partnership with Entertainment Earth.) Look through the gallery below for more images if you’re on the fence. Then tell us your favorites in comments.

The original Boy Wonder swings in.
Geek Culture 5 days ago