Because McFarlane Toys‘ DC Multiverse line goes back and forth between full themed waves and individual releases, it can be tough to group them, especially when the company sends over a big box for review. In the case of the latest samples, the easiest way to break them down, therefore, became into loosely Batman-affiliated figures, and Superman– affiliated figures. So consider this part one in a series of two. The most notable inclusions in this grouping are Lobo, a natural for McFarlane, and two Lex Luthors. Jokers have regularly featured since the company got DC toy rights, but this marks the big debut for Superman’s top foe, and it’s a twofer. 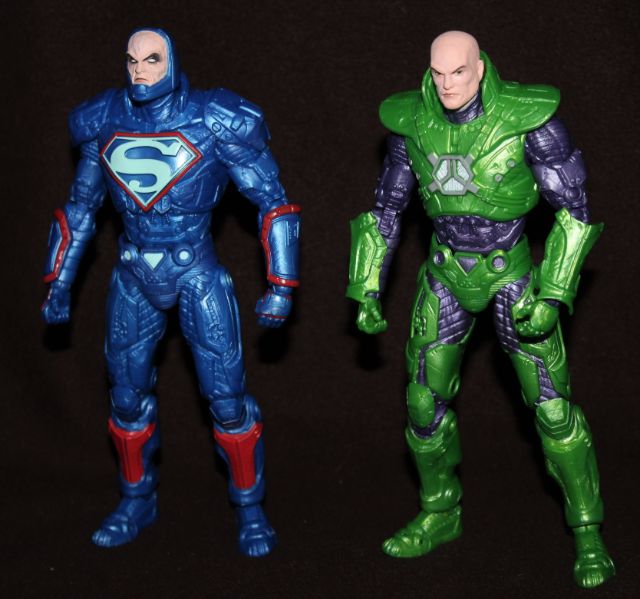 The classic Lex Luthor in power armor looks, frankly, like everything fans would expect from a McFarlane Luthor. From a distance, it’s immediately recognizable. Up close, it’s intricate with the details. Boasting all McFarlane’s usual joints, the figure’s articulation faces no hindrance with the armor, which gives enough to make posing easy.

Showing the value of a clever paint job, the Apokolips Luthor is the same basic sculpt, with new chest armor, forearm guards, and head. It makes all the difference; only in a close shot can an observer easily tell they share most parts. To make them more different, however, the Apokolips Luthor comes with a throne. 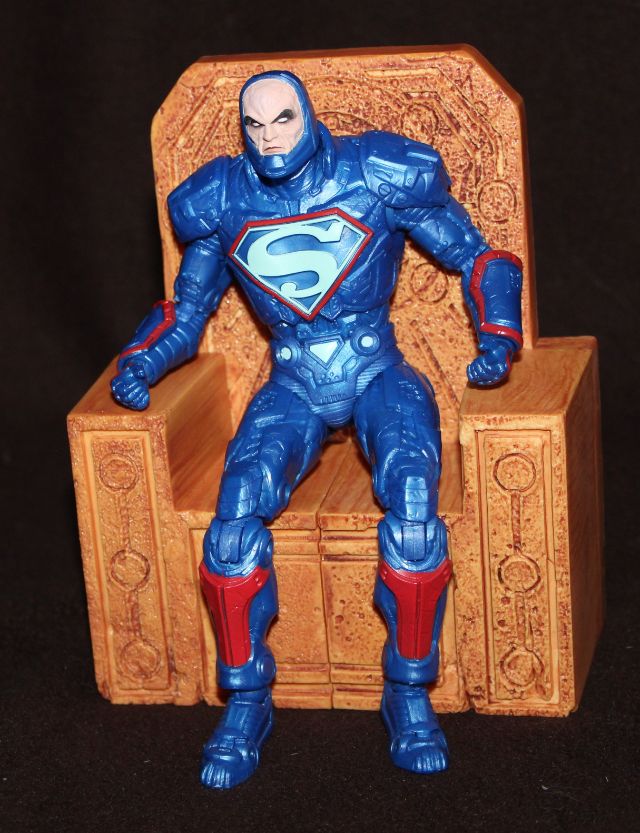 Now, anyone who collects all of McFarlane Toys’ DC line will likely ask the same question. And the answer is yes, but… 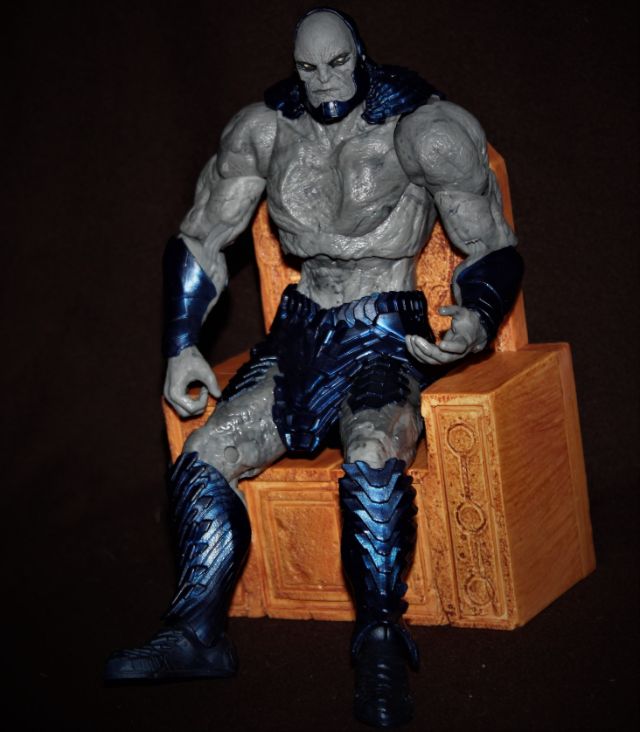 …the problem with the Snyderverse Darkseid here isn’t the size. It’s the fact that his leg articulation barely lets him sit down at all. That said, he can approximate a seated stance. Anyone buying this Lex just for the throne, consider the image above and purchase (or not) accordingly. Want just one of the Lex Luthors? The classic colors version is the winner. 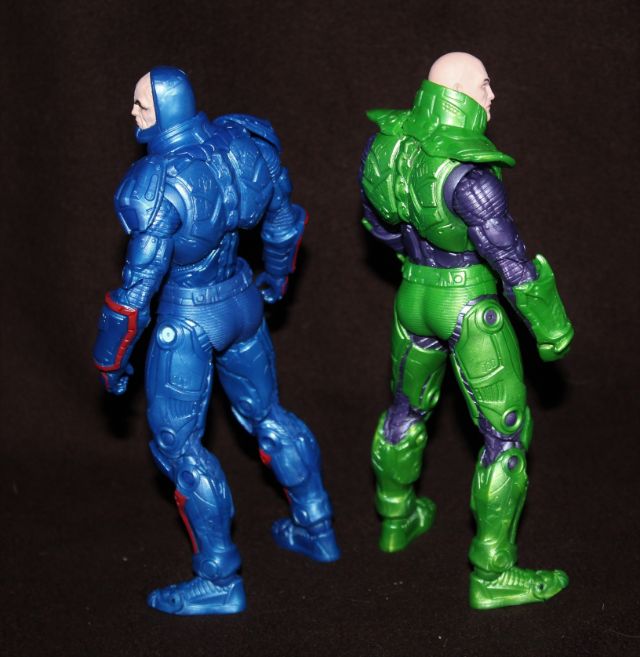 Lobo, meanwhile, is a character Todd McFarlane has clearly been dying to make. With his love of bikers, chains, indestructible demons (Czarnians, same diff), and domino-style eye markings, he’s lovingly crafted here. Early promo shots caught the head sculpt at a weird angle that made it look a little off, but the final product should satisfy. The double neck joint allows it plenty of movement, too. 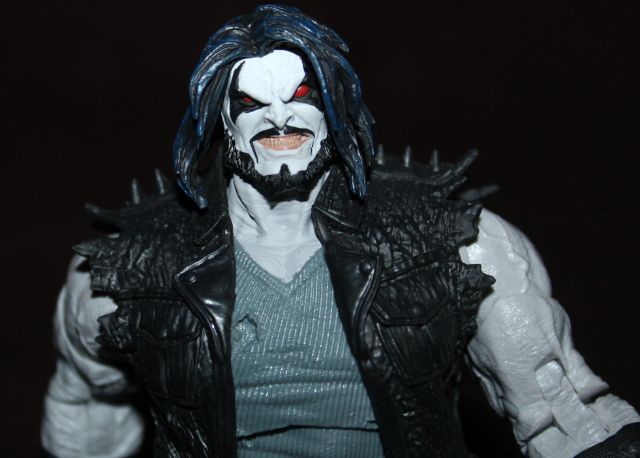 On our sample, his left hip is a bit loose, and the arms sometimes feel in danger of breaking if forced, but they have not yet. The chain-hook would be easier to wrap around his forearm if his hands popped off, but it’s not clear they do, and forcing them also feels dangerous. Maybe braver buyers will know. At any rate, some judicious stretching ultimately gets it to wrap around his bicep while the hand holds the single chain part. Or simply wrap the wraparound part in his fist.

Lobo’s vest remains glued to his upper body, but the lower torso retains full movement. Depending on how big you think Lobo is, he may even be in scale with smaller figures — Mattel’s Comic-Con exclusive version is similar sized despite being ostensible 6-inch scale. And his back features a message to any collectors who may not appreciate the sculpt… 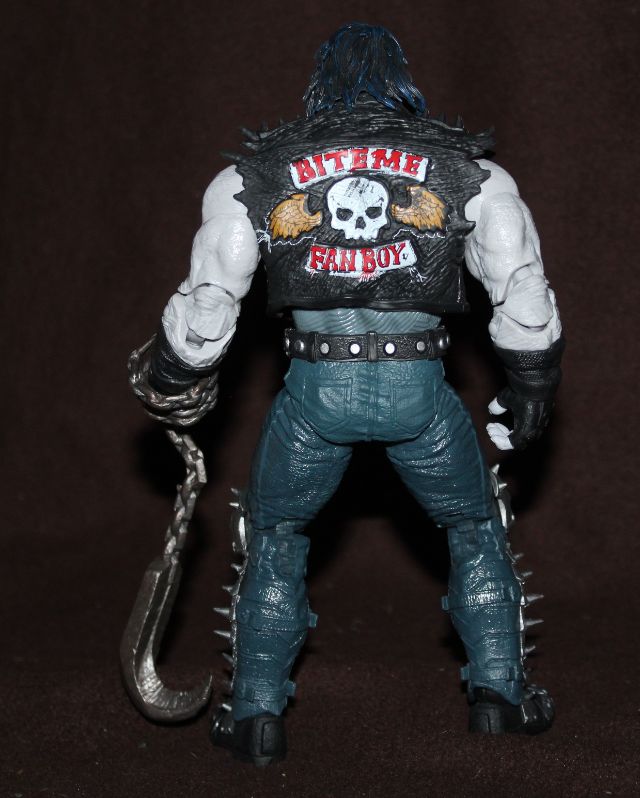 Superboy Prime feels a bit like he came from a different toy line. With a leaner, smaller body and coloring that looks right out of the marker shades from a kid’s coloring book, he’s distinct. But not distinctly McFarlane. 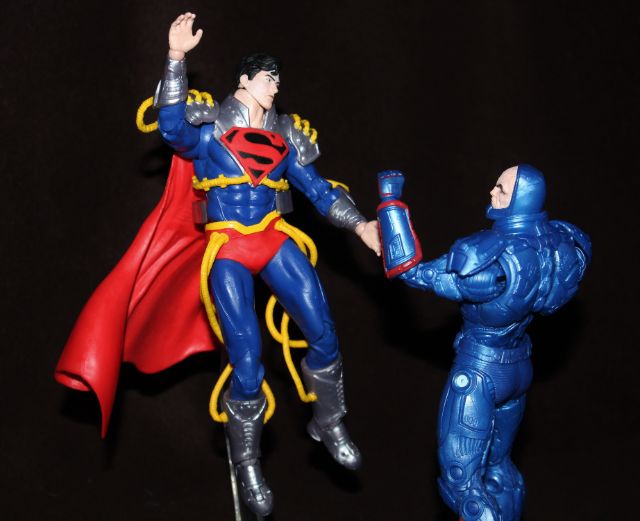 He does come with the great McFarlane flight stand, which is the most transparent of any on the market right now, and as such the best for basic display. But that costume design and its primary hues really are a matter of taste. 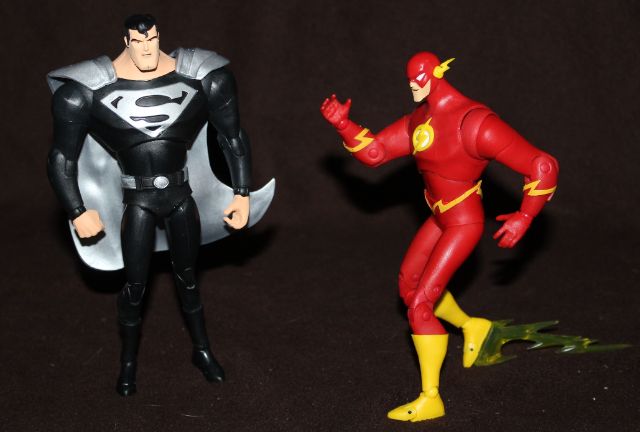 Two new-ish animated-style figures rounded out our Superman set. Justice Lord Superman simply seems to be a black and gray repaint of the first animated Superman figure, with the same girder accessory. Flash features less of a barrel chest than previous animated heroes in this line, with a more well-rounded physique. But like all McFarlane Flashes, he includes a lightning effect. This one goes on either foot. The only issue with his design? Those black pins on his mid-foot joint stand out more than they should. 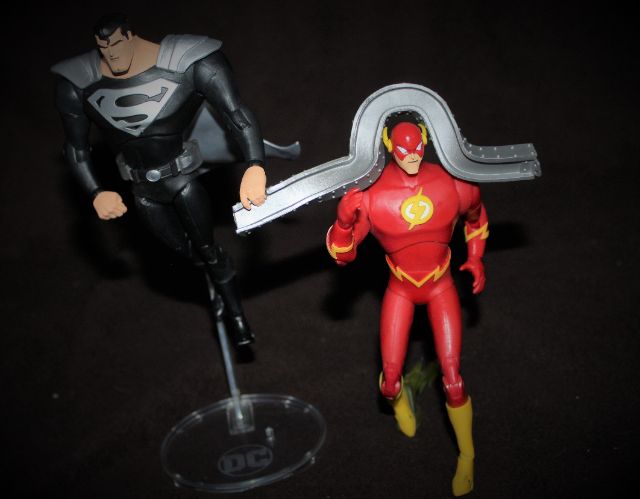 (Flight stand is not included with the animated Superman.) As with previous figures in the line, they stand pretty impressively unaided considering how top-heavy the design looks. In Flash’s case, the lightning bolt helps a great deal. And both improve significantly over the less-articulated DC Direct versions.

Entertainment Earth has Lobo and some of the others in stock for $19.99. They are Superhero Hype affiliate partners, and SHH can earn fees based on purchases. But that’s about the standard price anywhere. Lobo and the Luthors are well worth it, especially now that Hasbro 6-inchers cost even more than that. Superboy Prime and the animated figures look better alongside an existing collection of similar items.

Take a look through the full gallery below. Then let us know which one is your favorite in comments.

There's no bad blood between these Luthors, as Jon Cryer welcomes Michael Cudlitz's new incarnation of Lex Luthor in Superman…
TV 2 days ago

The third season of Superman & Lois will bring Lex Luthor back for revenge, as The Walking Dead's Michael Cudlitz…
TV 4 days ago