The original Ectotron kicked off a line of Transformers crossovers with other properties, one that has since expanded to include Top Gun, Back to the Future, and X-Men. But with a new Ghostbusters movie on the way, and a new version of Ecto-1 featured in it, the figure got an update to reflect that. With improved headsculpt and updated deco, the figure also includes the new movie ghost Muncher alongside the in-scale Slimer. And rather than coming in a vintage style Transformers box in vehicle mode, the Ghostbusters: Afterlife edition comes in a comic pack, displayed in robot mode. 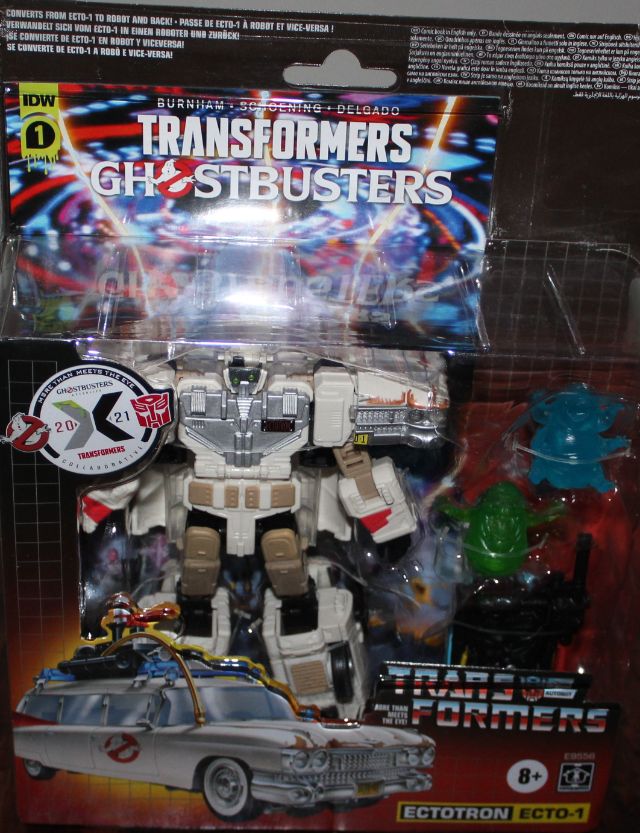 Ectotron’s transformation is fairly basic, for the most part. Like old-school favorites, he blatantly wears the front of the car as shoulder pads, and much of the vehicle body rides on his back like a turtle shell. Arms and legs tuck in underneath quite easily to make the car mode. 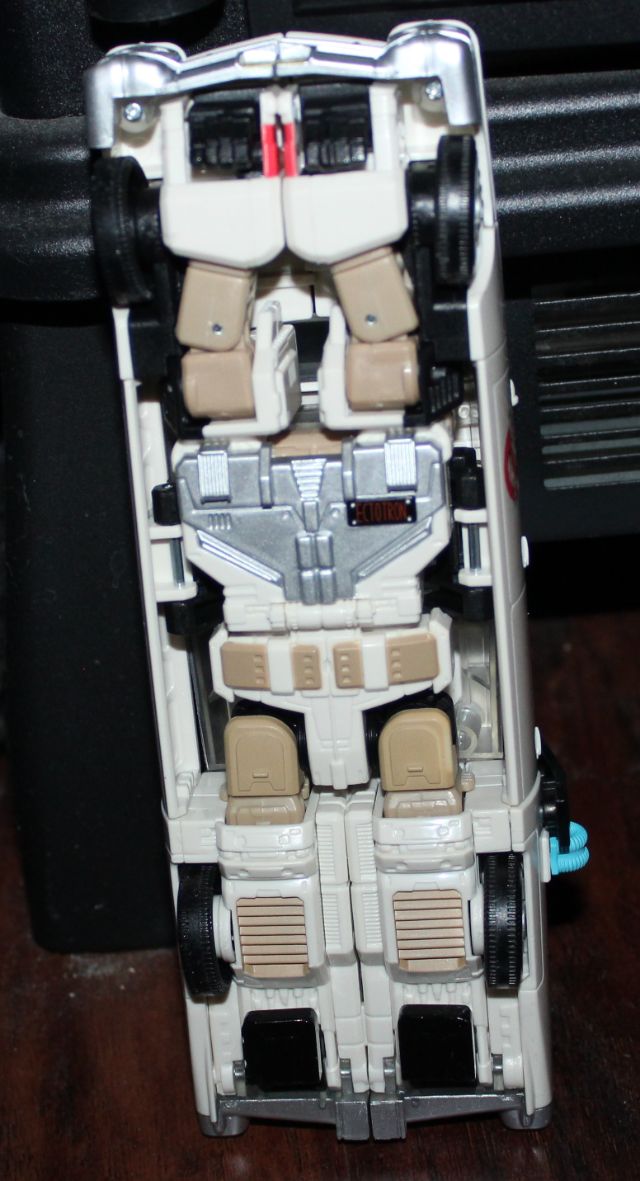 Where it gets mildly complicated is the roof rack/proton pack. All the junk on the roof between the sirens comes off and folds over to become Ectotron’s proton pack. But to get it back in requires wrapping the toothpaste-blue cord just-so around the midsection, and then plugging the tabs on into slots. But just like with the mini-ladder on his leg that also plugs into the roof in vehicle mode, the tabs are a soft, rubbery texture, to go into hard plastic slots. That’s not always an easy fit. 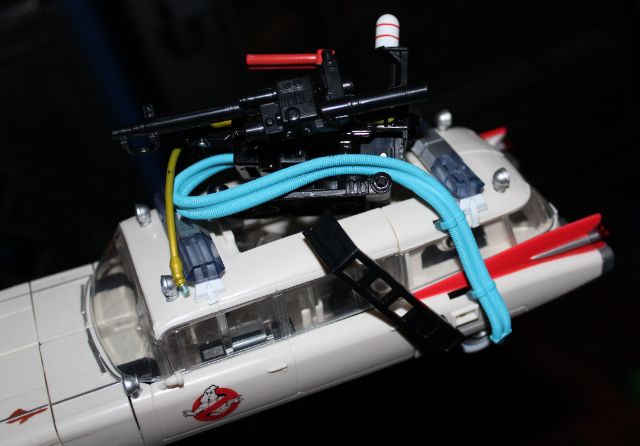 The neutrona wand just plugs into the side of the roof gear in vehicle mode easily enough. In robot mode, the proton pack is meant to plug in to his back with a double tab and slot assembly, but it’s not super tight. One might expect the backpack to fall off eventually. 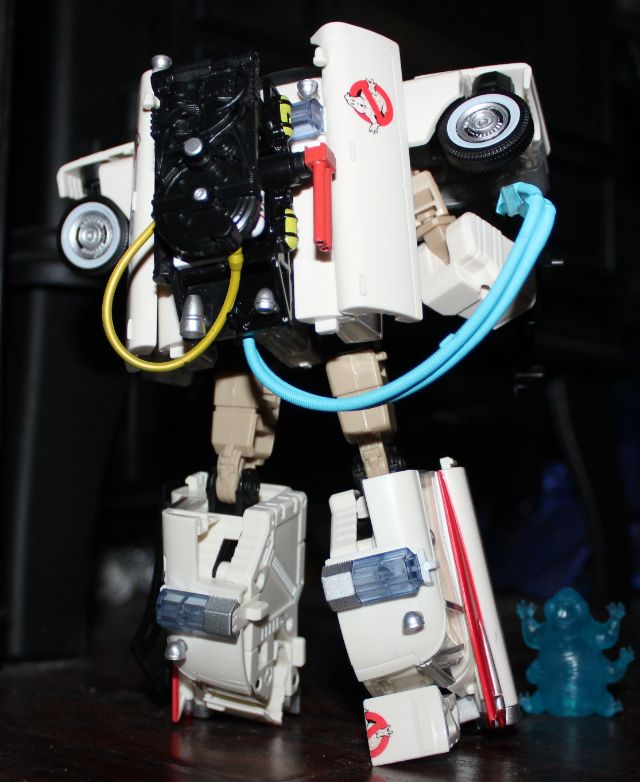 Another downside is the lower knee joints are slightly weak. Angle them as far backwards as they can go to steady them. 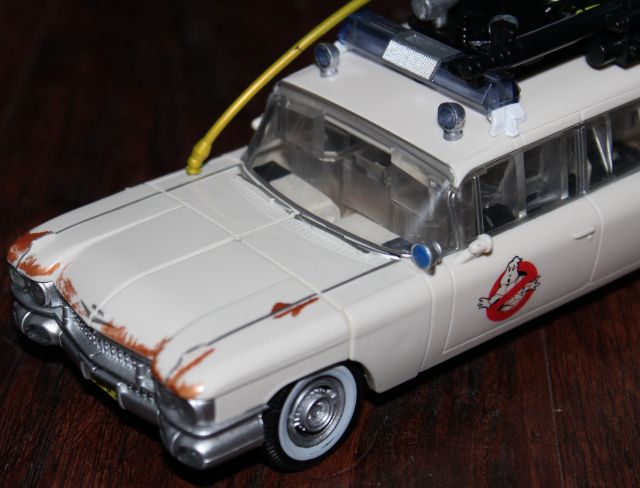 In robot mode, the main change from the prior model is updated Ecto-goggles. In car mode, it’s the rust deco and scratched up Ghostbusters logos. Don’t expect the new jump seat from the trailers — that would require totally new transformation engineering.

Slimer and Muncher each have a hole in the bottom to attach to pegs, only one of which is apparent, on the roof in car mode. So either one can ride along.

The comic that comes with the toy is a fun alternate universe take, in which Gozer and the terror dogs invade and destroy Cybertron, manifesting as robots. 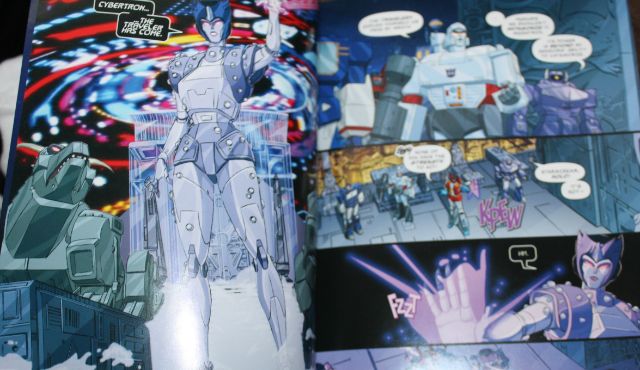 Ectotron, whose real name is Ectronomyous Diamatron, hilariously already looks like a chopped up car long before he arrives on Earth and scans the actual Ecto-1. Also, of course the ghost of Starscream shows up, and gives us a new logo… 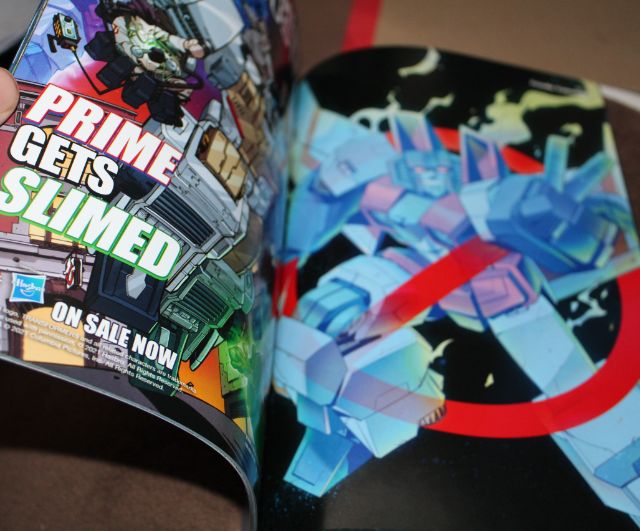 So that’s fun. But the bad news is the price tag: $59.99. That’s just too much, unless one considers that it merits a premium charge for being a target exclusive. Transformers-wise, Ectotron is a Voyager-class $30 figure at most. Throwing in a comic and two translucent ghosts doesn’t add $20 of value.

Still, it’s not like there’s a choice. The original Ectotron went way up in value, and odds are that this one will too. Recent Target exclusive history suggests that when it’s a toy of an in-demand property, the item becomes impossible to find. As of this writing, however, he is available online.

Take a look at more images in our gallery below, and you decide if he’s worth the extra scratch. Let us know what you think in comments below.

Bumblebee's back, along with an oddly repurposed bad guy.
Geek Culture 2 months ago
Loading Comments...