It’s still a little weird for any longtime comics fan to see a Spawn logo on Batman toy packages. But such is the new reality, and one tremendous plus of McFarlane Toys holding the DC Mutiverse license is that each figure gets individually sculpted. This may change down the line, but most toy companies that make superheroes — even top McFarlane rival NECA — make generic “superhero” base bodies that become different characters as a result of costume and accessory add-ons. So far, save for figures that are explicitly variants, McFarlane has not done that. Even as a large percentage of the DC figures the company makes are versions of Batman. Admittedly, the Dark Nights Metal versions of Batman look pretty different and far out. And Todd McFarlane himself favors characters who “look cool,” often regardless of how significant their roles.

The four figures from the first wave based on Batmen from the Dark Multiverse have both formal and informal names. Officially, the packages dub them Batman Earth-1, Batman Earth-44, Batman Earth-32, and The Grim Knight. In comics, they are better known as The Devastator, Murder Machine, Dawnbreaker, and…The Grim Knight. One can likely assume “Murder” was deemed inappropriate for a toy, while Devastator as a toy name may be owned by Transformers. Maybe Dawnbreaker sounded too much like a Twilight book. Anyway, they are basically Batman as Doomsday, Batman as Cyborg, Batman as Green Lantern, and Batman as not-Punisher. And as they hit stores, another figure also arrives in super-limited quantities: a chase edition bronze Joker. It’s limited to 3,000 worldwide, and inserted randomly into DC Multiverse figure cases. 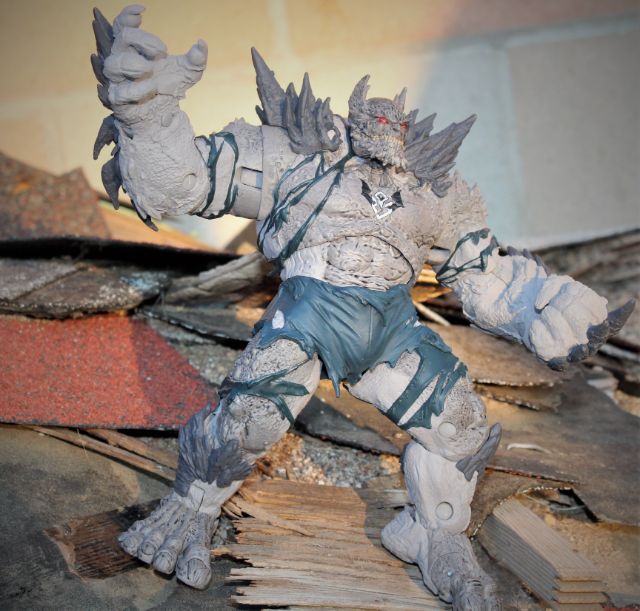 Batman Earth-1, The Devastator, is the standout of the wave. In any other superhero line, he’d be the build-a-figure, or a deluxe figure costing more. Here, he’s $20 like the rest (so expect him to sell faster, as that’s a good deal for any toy line). The figure is also completely solid, so that’s a lot of plastic for the buck. 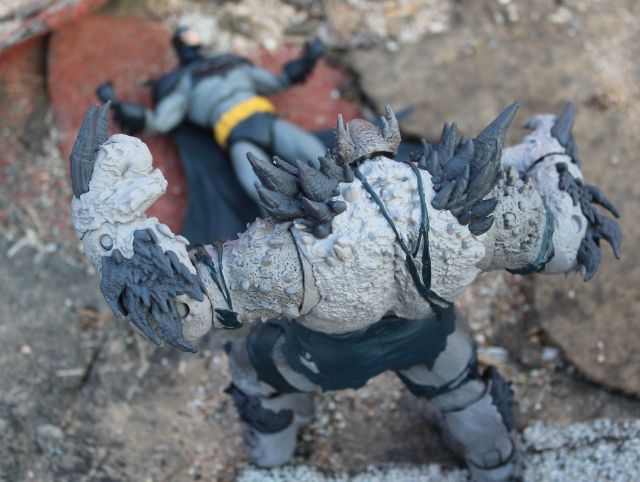 Due to his size, this figure features the most deviations from the 22-point McFarlane articulation system. Knees and elbows do not have double hinges, but they do have combined hinge-swivel joints, as do his ankles, knees, and wrists. Butterfly ball joints do feature in the chest, but are tougher to work with in this size. Neck is a double ball post, which allows for much more versatility in head poses than seems apparent. Plus both his jaw and tongue are individually articulated. The shorts are a rubbery overlay, and while the bigger spikes are soft, the edges of his eyebrows are sharp and hard. Be careful. 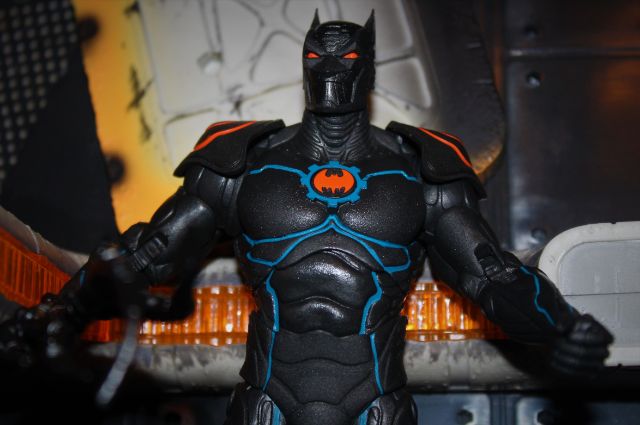 Batman Earth-44, Murder Machine, is the next best, thanks to a sleek, Tron-like design with smooth, fluid posing. He’s also one where the McFarlane wrist ball-joint can still feel a touch too conspicuous when the swap-out computer tendril hand is used to replace either the right fist or left open hand. The hands largely avoid that problem by enveloping the ball, but the tendril piece design doesn’t take that into account. Still: tentacle attack Batman! 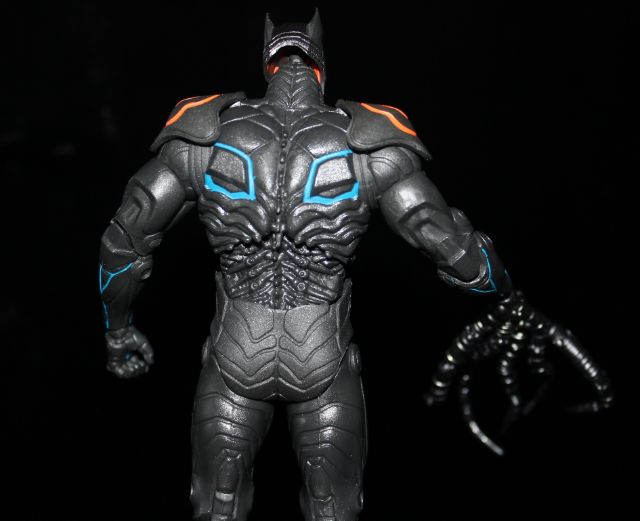 The Grim Knight is like a SWAT team Batman, loaded with guns and gear. If not for the cowl and Bat-logo, he could be the Punisher, or any urban military dude. Presumably to save too much expense, the guns on his back are all just one big solid V-shaped piece, but he has two to hold as well. So his hands do not remain empty. 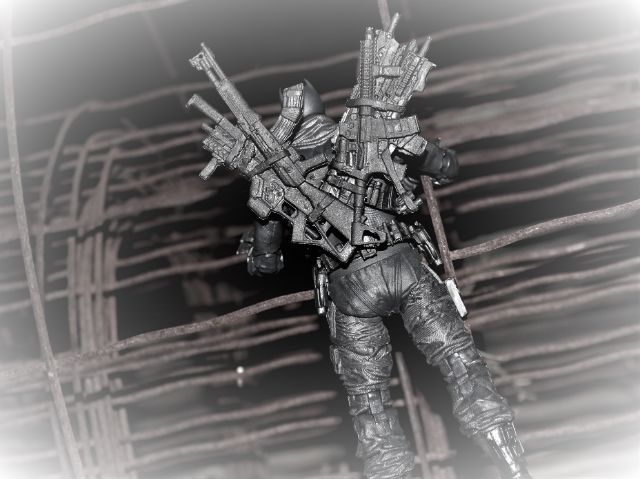 Initial images had the cowl incongruously looking like Adam West’s. On the final figure, it’s about 50/50 between West and Ben Affleck. The jaw is still a touch cartoony — given how good McFarlane can be at realism, it would be great to see them give a more photoreal human face to Batman one of these days. All thus far verge on the stylized. Grim Knight is closer to realistic than most, but even closer would rule. 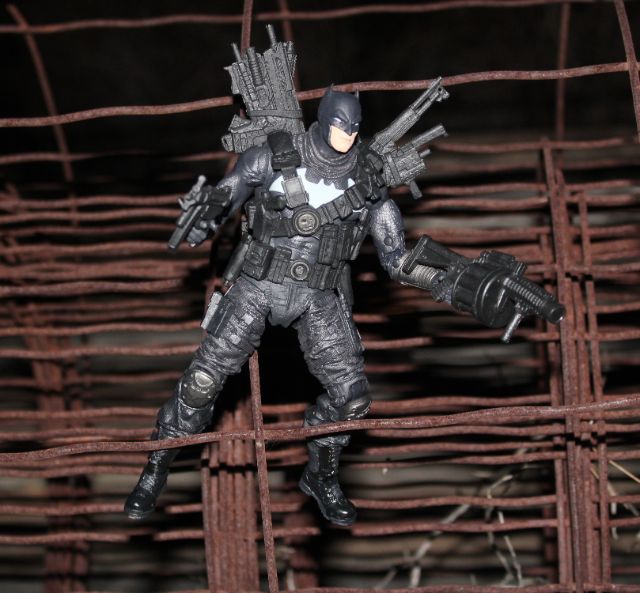 Batman Earth-32, Dawnbreaker, comes with a flight stand for cool levitation poses (even more if one attaches the stand to non-horizontal surfaces). His physique is comic-booky in that Rob Liefeld wide-torso way, and his codpiece large. Dude has quite the thigh gap. 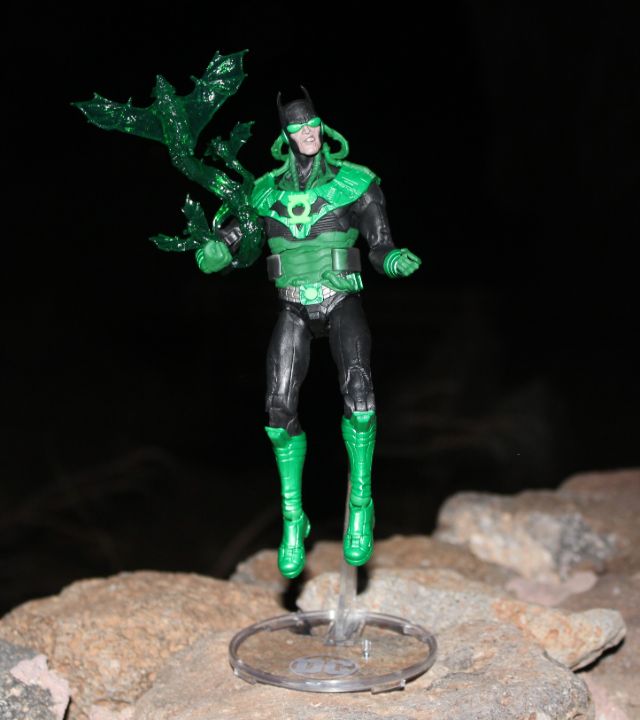 His boots and shoulder armor have a nice shiny finish, and while the tubes on his head limit movement, they are flexible. The translucent hard-light hologram of green bats is cool, but my one gripe is that affixing it to his arm is tricky. There’s no one obvious way to do it, and most attempts leave it pretty loose. Perhaps others will have more luck with that. Finding a way to plug it into the figure might work better on future Green Lantern types. 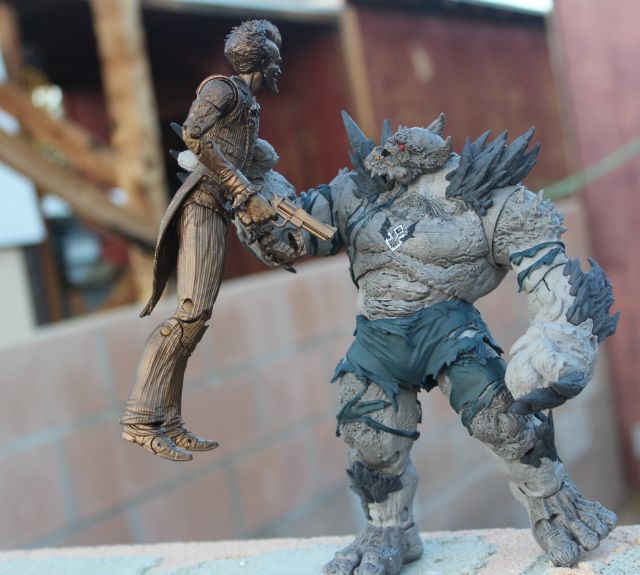 Bronze Joker is an interesting test case. Now that so many figures sell as Walmart and Target exclusives, and both sites have unreliable-at-best websites, toy collecting faces a new dawn of scalpers. Once they enter the market, chase figures become a thing again, but…here’s a big caveat…the chase figure works best when it’s a scene or comic specific variant fans might specifically desire. Back in the day, McFarlane did many metallic color repaints, and they rarely seemed to sell mass quantities. A bronze Joker never appeared in the Arkham Asylum game whence this figure design hails, so the main appeal is the rareness. He comes with a foil-edged trading card, and future chase figures will have foil-stamped packages, though not this one. 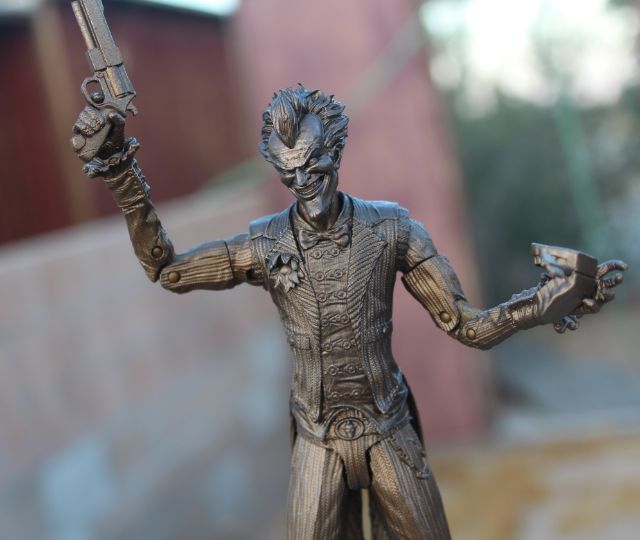 Because the regular Joker comes in such gaudy colors, one benefit of the bronze figure is that it really does showcase just how intricate the sculpt is. And also terrifying. It might inspire more collectors who may have passed the original up to go back and give that one another look. Joker comes with one gun and two sets of chattering teeth. He may look like a statue, but he poses dynamically. 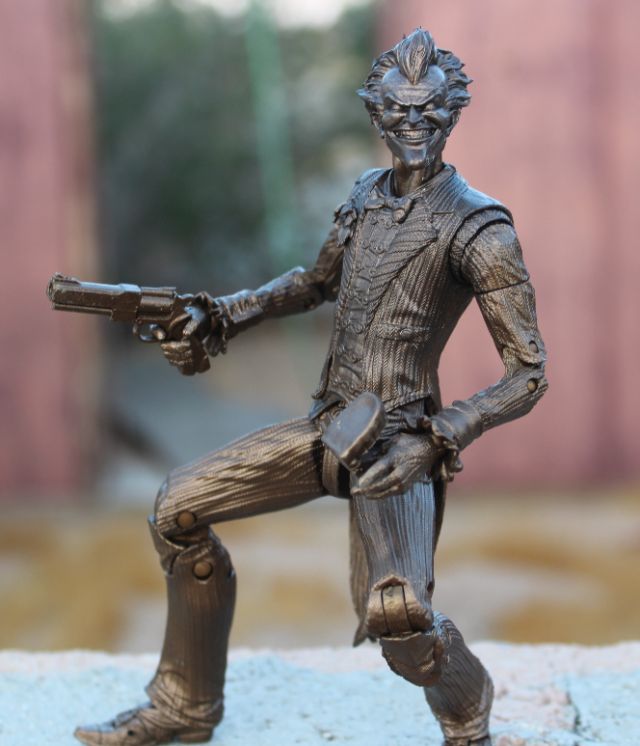 Nice enough figure if one finds him, but not worth paying a super-premium for if not.

All-told, while the Dark Multiverse storyline may end up a flash in the pan (save the Batman Who Laughs, who definitely seems here to stay), the figures won’t. Similar enough to typical Spawn waves, they’re squarely in McFarlane Toys’ wheelhouse, and a figure like Devastator shows them adapting their articulation system to different body types. Fans of monsters and robots generally should go for him and Murder Machine, while Grim Knight and Dawnbreaker seem more geared to particular tastes.

Get a good look at all of them in our gallery below, and decide for yourself. Which one do you like best? Let us know in comments below.