Hellboy: The Bones of Giants Gets a Comic Book Adaptation

Back in 2001, Mike Mignola teamed up with novelist Christopher Golden on a Hellboy prose novel that put Big Red in the middle of a whodunit with ties to Norse mythology. And in honor of its 20th anniversary, the story is getting the comic book treatment. Dark Horse has just announced plans to re-imagine Hellboy: The Bones of Giants as a four-issue miniseries this fall.

Mignola and Golden are co-writing the series, which also features artwork by Matt Smith (who claims to have read the original novel “many times” since its original publication). The story kicks off in Sweden, when a large skeleton wielding an iron hammer washes ashore on a frozen riverbank. When Hellboy arrives on the scene and attempts to lift the hammer, a lightning strike fuses it to his Right Hand of Doom. The experience soon causes him to have several visions of someone else’s life. And it’s not long before he must deal with a litany of mythological threats, including one that could spell the end of all nine realms.

“Matt Smith’s Barbarian Lord is one of my favorite contemporary comics,” said Mignola in a new statement. “It’s awfully hard to imagine an artist who is a better fit than Matt to draw Hellboy: The Bones of Giants, with its mix of Norse mythology and action-packed drama.”

“I’ve been deeply in love with Norse mythology since first reading Dorothy Hosford’s Thunder of the Gods in the fifth grade,” added Golden. “I might have been the only one to take it out of the St. Bridget’s School library that year, but I read it fifteen times, so there wasn’t much opportunity for other kids to read it. When Mike first told me he had this image in his head of lightning flashing down from the sky to strike Mjollnir, where it lay in the grip of the corpse of Thor…well, that was like Christmas morning, getting to indulge my love of Norse myth and my love of Hellboy.”

“The story that Mike and I created in the novel is epic,” continued Golden. “And now Hellboy’s fight against the Frost Giants will get the full color treatment it deserves by one of the great artists making comics today—Matt Smith—who also happens to love Norse mythology even more than Mike and I do. This adaptation exists purely because Matt wanted to draw it. And when you see the art, you’ll see how much fun we all had on every page.”

Hellboy: The Bones of Giants #1 hits comic shops on November 3. You can view the cover for the first issue below.

Are you excited to check out the new series later this year? Let us know in the comment section! 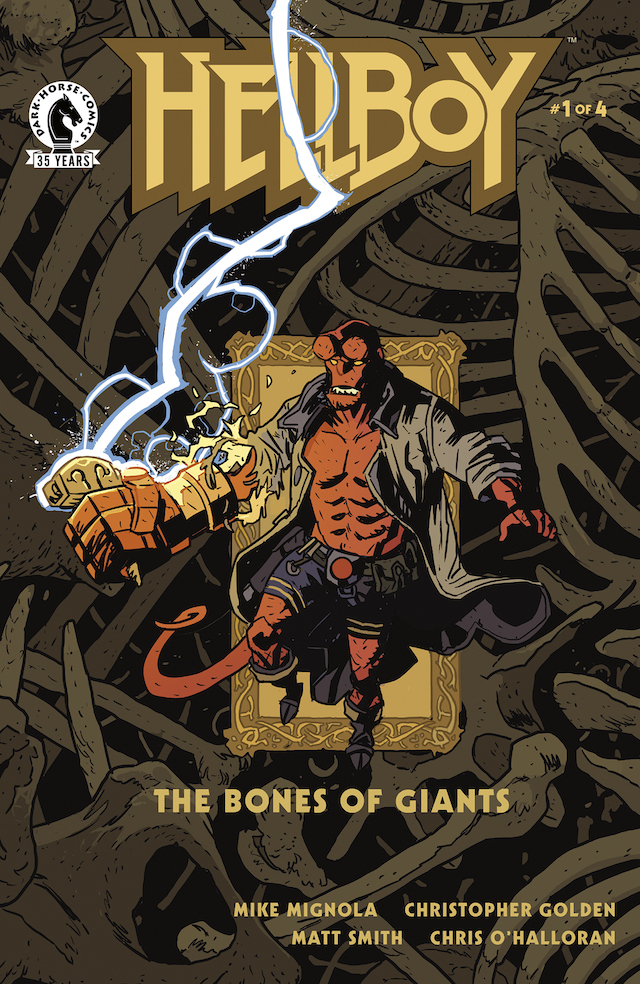 At The Game Awards, fans got their first look at Hellboy: Web of Wyrd, the first full-fledged Hellboy video game…
Video Games 2 months ago

Exclusive Preview – Hellboy and the B.P.R.D.: Night of the Cyclops

Hellboy's assignment in Greece leads to a much bigger adventure in the new one-shot comic book, Hellboy and the B.P.R.D.:…
Comics 9 months ago

Young Hellboy returns this summer in a new miniseries, Assault on Castle Death, as an unknown enemy targets Hellboy for…
Comics 10 months ago
Loading Comments...