Last week, Marvel sacked Chuck Wendig from two of their Star Wars books for—in his own words—“being political and vulgar” on Twitter. The internet has had a lot to say about it. Although the writer has urged his followers not to worry, since comics represent a small part of his body of work, he’s had no shortage of support from the geek community. Beyond fan sites like Making Star Wars and Tosche Station offering their encouragement, Doctor Strange co-screenwriter C. Robert Cargill and Vision comic writer Chelsea Cain are among the industry figures who have rallied behind him. Unfortunately, there’s still a contingent of fans that haven’t been so kind.

Over the weekend, Wendig appeared at the inaugural Bucks County Book Festival in Doylestown, Pennsylvania for a sci-fi/fantasy panel alongside fellow author Fran Wilde (pictured choking him above). Wendig and Wilde, both Pennsylvania natives, discussed a variety of topics, including how fantasy writers can find success outside the genre once they’ve been pigeonholed by their audience as well as whether the concept of “genre fiction” still has any real meaning. When his firing came up, Wendig used the opportunity to expound on the dark side of social media that’s played a role in his life over the last three years.

“Part of this culminated because back when I wrote Star Wars: Aftermath, I included a few LGBT characters in that book,” said Wendig. “I was doing a midnight signing in Atlanta, Georgia for DragonCon at a Barnes & Noble. I got in the car around 1:30-2:00 in the morning to go back to the hotel and I was like, ‘Oh, let’s check my reviews!’ And I looked on Amazon and there was, like, a stack of one-star reviews, just piled up there, like 10, 11 one-star reviews. And I was like, ‘What? That’s weird! How did they read the book that fast? I guess I’m terrible. I’m a bad author. This is not good. I think I’ve done a very bad thing.’ But then I would meet people all weekend who loved the book, [and] then I would check the internet and the internet hated the book.”

Wendig went on to explain how a common trope of these one-star reviews was the use of the pejorative “social justice warrior” or “SJW” in reference to him and his inclusion of gay characters. “So began a long social media harassment campaign that was not always fun to deal with. I’ve had death threats in some particularly fun emails from people online who were very upset about certain social content inside Star Wars. And so, they’ve long tried to get me fired from various jobs and I think at this point they may have [had] some success with that.”

Despite this, Wendig made a point to reiterate that he isn’t lacking in optimism. “Even after the events of this weekend, I’ve had a lot of people reach out in terms of old editors who worked [at Marvel] or people at other comic book companies or writers and friends. It sounds weird that it’s actually a positive experience, but there’s a lot of really great things that sort of came out of it and also, I think, shone a light on how this stuff works.”

Wilde, whose most recent novel, Horizon, was published in February, also put in her two cents about Wendig’s situation. “We have managed to weaponize the comment section against ourselves in a whole bunch of ways,” she said. “But the worst part about this is the way that this was allowed to proliferate so quickly. Basically, things are being programmed, and it’s really easy to program a cascade of responses, or a bot, to do a lot of this work for you. And then the humans among us wind up interacting with and arguing with robots.”

“It’s a time-waster,” she continued. “And it’s a resource waster for you guys who love to read and who love to write because everybody’s then going out and fighting these robot wars on social media when, really, what we want to be doing is telling stories and communicating with each other and connecting with each other, which was the original intent of social media.”

Wendig’s newest effort, The Raptor & the Wren—the latest in his series of Miriam Black novels—is available now, with the follow-up scheduled for release in 2019. If you’re lucky enough to attend one of his signings, he’ll gladly write his prediction of your demise on the book’s title page. You can check out what he foresaw about my death below, and let us know what you think of his remarks in the comment section. 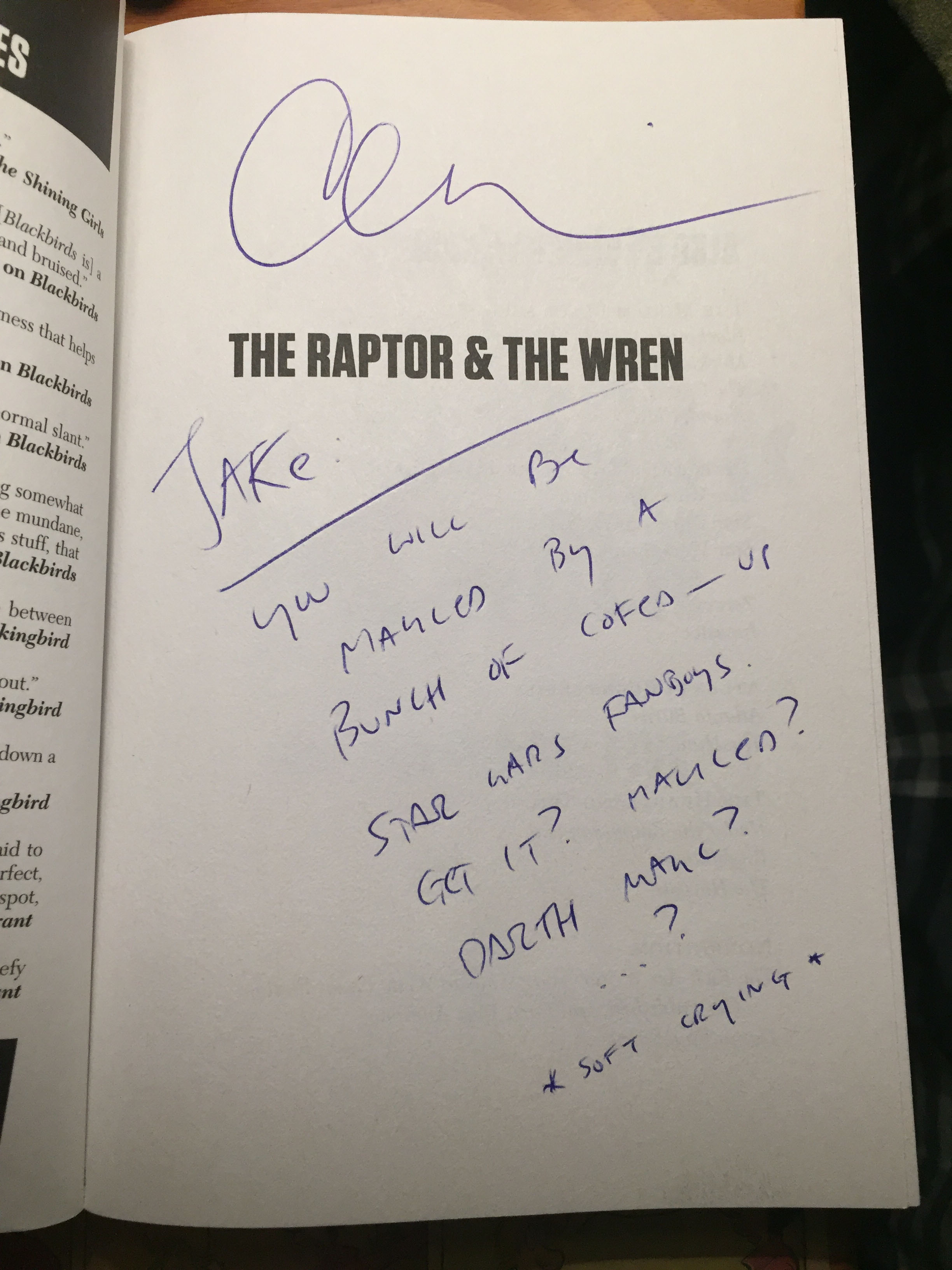 After his work on Deadpool 3 and Stranger Things 5, Shawn Levy will work on a Star Wars film.
Movies 1 month ago

Lucasfilm has released new promo artwork for Star Wars Jedi: Survivor ahead of the new trailer's premiere at The Games…
Video Games 2 months ago

Jon Kasdan Open to Returning to Star Wars For Solo 2

Even Jon Kasdan, who co-wrote Solo: A Star Wars Story, is intrigued by the idea of a sequel.
Movies 2 months ago
Loading Comments...